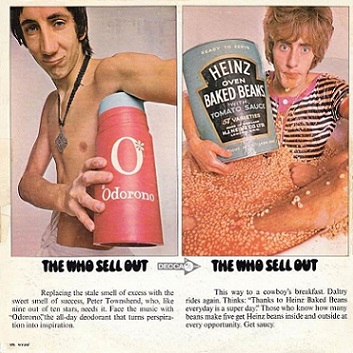 "The Who Sell Out" was the third studio album by The Who. It was released on 15 December 1967 and is now re-released in a super deluxe edition. Below you can read all the details - the amazing thing is that this super deluxe edition will contain 46 previously unreleased songs!

Initially released in December 1967 and described latterly by Rolling Stone as "THE WHO's finest album," "The Who Sell Out" reflected a remarkable year in popular culture. As well as being forever immortalized as the moment when the counterculture and the "Love Generation" became a global phenomenon and "pop" began metamorphosing into "rock". The new Super Deluxe Edition of "The Who Sell Out" features 112 tracks, 46 of which are unreleased, an 80-page, hard-back, full-color book, including rare period photos, memorabilia, track-by-track annotation and new sleeve notes by Pete Townshend with comments from the likes of Pete Drummond (Radio London DJ), Richard Evans (designer) and Roy Flynn (the Speakeasy club manager). The Super Deluxe package also includes nine posters and inserts, including replicas of 20" x 30" original Adrian George album poster, a gig poster from The City Hall, Newcastle, a Saville Theatre show 8-page program, a business card for the Bag o' Nails club, Kingly Street, a WHO fan club photo of group, a flyer for Bath Pavilion concerts including THE WHO, a crack-back bumper sticker for Wonderful Radio London, Keith Moon's Speakeasy club membership card and a WHO fan club newsletter. As a taster for the set an EP of Pete Townshend's previously unreleased demos has today been released on all streaming services including "Pictures Of Lily" (new remix, previously unreleased), "Kids! Do You Want Kids?" (a.k.a. "Do You Want Kids, Kids?") (previously unreleased) and "Odorono" (previously unreleased). "The Who Sell Out" was originally planned by Pete Townshend and the band's managers Kit Lambert and Chris Stamp, as a loose concept album including jingles and commercials linking the songs stylized as a pirate radio broadcast. This concept was born out of necessity as their label and management wanted a new album and Townshend felt that he didn't have enough songs. The groundbreaking original plan for "Sell Out" was to sell advertising space on the album but instead the band opted for writing their own jingles paying tribute to pirate radio stations and to parody an increasingly consumerist society. The homage to pop-art is evident in both the advertising jingles and the iconic sleeve design created by David King who was the art director at the Sunday Times, and Roger Law who invented the "Spitting Image" TV show. The sleeve features four advertising images, taken by the renowned photographer David Montgomery, of each band member Odorono deodorant (Pete Townshend), Medac spot cream (Keith Moon), Charles Atlas (John Entwistle) and Roger Daltrey and Heinz baked beans. The story goes that Roger Daltrey caught pneumonia from sitting in the cold beans for too long. "The Who Sell Out" is a bold depiction of the period in which it was made, the tail-end of the "swinging-'60s" meets pop-art mixed with psychedelia and straight-ahead pop. It's a glorious blend of classic powerful WHO instrumentation, melodic harmonies, satirical lyrical imagery crystallized for what was only the group's third album. The album's ambition and scope is unrivalled by THE WHO, or any other act from that period. Within the bold concept, were a batch of fabulous and diverse songs. "I Can See For Miles", a Top 10 hit at the time, is a WHO classic. "Rael", a Townshend "mini-opera" with musical motifs that reappeared in "Tommy" and the psychedelic blast of "Armenia City In The Sky" and "Relax" are among the very best material anyone wrote during the 1960s. One of the most extraordinary albums of any era, "The Who Sell Out" is THE WHO's last "pop" album. Two years later came "Tommy" — a double concept album about a deaf, dumb and blind kid.

"The Who Sell Out" Super Deluxe Edition

Disc 5 - 14 of Pete Townshend's original demos, previously unreleased and exclusive to this set

Other "The Who Sell Out" formats:

Also available in a variety of digital formats. 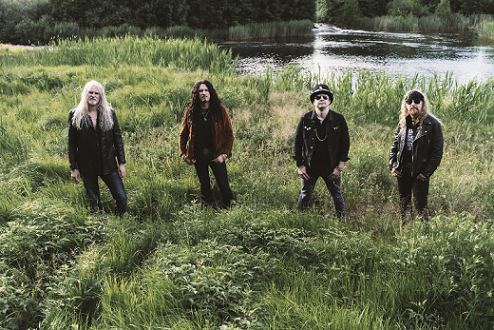 With a sound based on a wide range of influences, the band has released released one quality album after another since their debut in 1995. The dynamic interplay between original vocalist Magnus Ekwall (Ayreon, Mountain of Power), drummer Jolle Atlagic (Hanoi Rocks, Electric Boys, Firebird), guitarist Christian Carlsson (Cirkus Prütz) and bassist Roger Nilsson (Spiritual Beggars, Arch Enemy, Firebird) creates THE QUILL's unique, deep 70s heavy rock. No frills, just real rock at full throttle! The new songs like "Hallucinate" or "Keep On Moving" are bursting with confidence and adrenaline. "Left Brain Blues" and the title track "Earthrise" are reminiscent of Black Sabbath in their heyday. While tracks like "Dwarf Planet" and "Evil Omen" revive the heavy / psychedelic sides of early Led Zeppelin or Uriah Heep. The tracks on "Earthrise" tell stories of alienation set in the confines of space and time. Perhaps not a surprising theme given the state of the world today. But it's also a theme that runs through the entire history of mankind so far. Packed with catchy riffs, pounding bass lines and a fantastic frontman, this album will once again delight all fans of honest hard rock.

A Swedish-language song, which honors the Swedish Royal Guards first established in the year 1521, is the new single of Sabaton, called "Livgardet". The Swedish heavy metal war machine returns with new music two years after its latest album, "The Great War".

Bassist Pär Sundström explains: "Since 2012 and 'Carolus Rex', we have been looking forward to writing more songs in Swedish, and we felt that we were not done with the history of our fatherland. Over the past years, we have been discussing around topics until something obvious came up. One of the oldest military regiments in the world, the Swedish Royal Guard (Livgardet), was formed in the Sabaton home region in Sweden, Dalecarlia, in 1521 by the legendary Swedish king Gustav Vasa. For the past 500 years, they have evolved with the times and served under various kings and queens around the world and are still active today. We felt that such an anniversary would be worth a song, and we aimed at writing a respectful tribute, an anthem for this Swedish regiment and its legacy. The rich 500 years of history is, needless to say, extremely hard to fit into one song, and that is why we mainly focused on the parts and battles that happened during the age of the Swedish Empire. We aimed to write a respectful tribute, a powerful anthem, for this Swedish regiment and its remarkable legacy".

"The Royal Guard", the English-language version of the song, will be released on April 9, 2021. 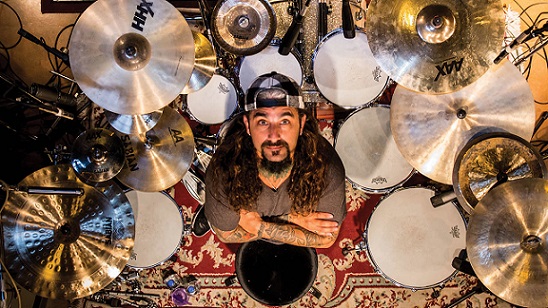 Who is the greatest drummer of all time? Jason Bonham or Neil Peart? Mike Portnoy weighs in and picks his favorite drummer ever!

In a Consequence of Sound round-table discussion with other three renowned drummers about the 40th anniversary of Rush's "Moving Pictures" and Neil Peart' s legacy, Mike Portnoy said the following.

Speaking about the greatness and influence of Peart, including how it compares to that of another iconic drummer, late Led Zeppelin member John Bonham, Portnoy said: "I think John Bonham has been universally acclaimed as one of the greatest of all time, and deservingly so — he really, really is deserving of that. But with all due respect, his entire recording career only lasted 11 years, and he's also now been gone for, what, I guess 40 years. So there is something to be said for his place in drumming history because he's been gone for so long. I think Neil had 40 years of a drumming career, and he's only been gone one year. So I think time will tell. It's ridiculous to even have to choose between the two, 'cause they both brought so much to the drum world and they both left behind such an incredible legacy. But I think the fact that Neil's drumming career was 40 years long and gave us 40 years of music and drumming to listen to and reflect on, I think, to me, that puts him ahead of John. I think he's the greatest of all time — I really do. And I think he's only been gone a year, so it's hard to really see how that's gonna be felt five, 10, 20 years from now. But I think he will go down in history as the greatest rock drummer of all time — I really do."

Portnoy added: "Another thing that also showed his impact was when he died last year, how it impacted everybody beyond drummers. The social media feeds, for weeks after he passed, was nothing but him. It was similar to when Eddie Van Halen died last year as well, and Eddie is a similar type of player in the guitar world; Eddie was what a lot of people consider the greatest of all time — up there with [Jimi] Hendrix — and the same here with Neil up there with Bonham. And the fact that they both went in the same year, but both of their deaths — Eddie and Neil — just went beyond just their respective instruments. The whole world was hit by it and affected by it".