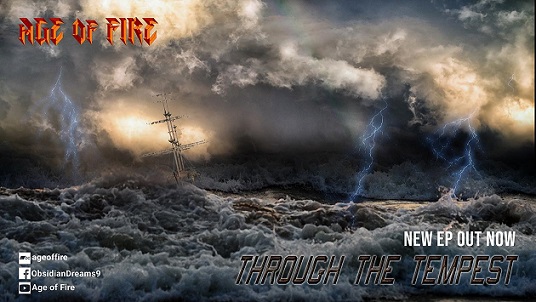 On July 12th, 2022, Age of Fire released their new EP titled “Through the Tempest”. In this EP is included the new single, “Seeds Of Tomorrow”, which is accompanied with a music video. You can read more info on the band and enjoy this new music video right below.

Formed in South Florida in 1988, Age of Fire set out to create their own style of Heavy Metal. To date, they have music that touches on thrash, symphonic, melodic and progressive metal. Having played clubs throughout the East Coast and Florida, they disbanded in 1991 but were resurrected by founding member Greg Brown in 2018.  Since then, their music has been heard on over 1,000 traditional and satellite radio stations around the world. The band continues to be featured in international media including Metal Hammer (Portugal), The Metal Mag (Europe), Fireworks (UK), Hard Music Base (Slovakia), Permafrost (Norway), Dead Rhetoric (USA/Sweden), Bunker (Russia), Iron Backstage (USA), Battlehelm (USA/UK/Sweden), High Speed Hangover (UK), Encyclopaedia Metallum (Canada) and Megadeth’s Megacruise. They are represented by SWC Global Media LLC, endorsed by Solar guitars and Dirtbag clothing.