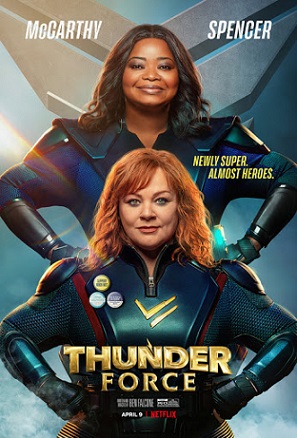 Corey Taylor of Slipknot, Scott Ian of Anthrax, Dave Lombardo (ex-Slayer) and Lzzy Hale of Halestorm have teamed up to provide the theme tune for Netflix's new film "Thunder Force".

The superhero flick will be released this Friday (April 9th), was written and directed by Ben Falcone and stars Melissa McCarthy and Octavia Spencer as "two childhood best friends who reunite as an unlikely crime-fighting superhero duo when one invents a formula that gives ordinary people superpowers".

The composer of the film's soundtrack, Fil Eisler posted on Twitter about the participation of Ian and Lombardo, describing them as his "childhood heroes".

Corey Taylor said: "'It was awesome to work on this track with Lzzy and be a part of the film "Thunder Force". It is always nice to be creative and work with other artists in the community – especially during this extended time at home. I’m excited for everyone to hear the song and see the film!"

Below you can watch the trailer of the film and listen to the theme!