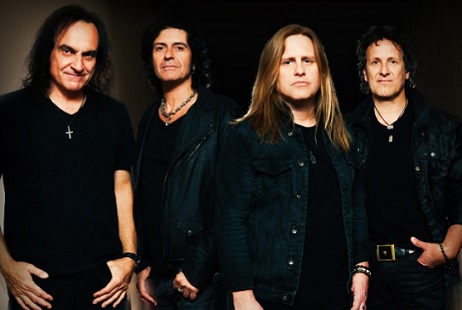 Last in Line, the hard rock/metal act around Vinny Appice and Vivian Campbell, is going to release its new album around Christmas 2021. The follow-up to "II" (2019) is tentatively due in late 2021 or early 2022. The label, which will release the album, hasn't been announced yet.

Vinny Appice spoke to Thomas S. Orwat Jr. of the "Glam Metal" podcast and said: "We got half of the record recorded, and then this (pandemic) hit. So it slowed everything down. Now we're negotiating another record deal at the moment, and we're going to get a schedule together… 'Cause this band, we can't (make music) over the Internet. Like, 'Hey, man, I've got this riff.' It doesn't work like that with this band. This band, like DIO and like (Black) Sabbath, jams in a room and comes up with stuff that way. The first Last in Line record we did jamming — we were jamming, and I recorded it, and we listened to it, and we worked that way. 'Cause it's heavier, and it's natural to do it that way for us. So we're gonna get together in the near future and start finishing the rest of the record".

Appice continued: "Meanwhile, we're waiting for a schedule of what's gonna happen with Def Leppard's tour dates; they had those big tour dates scheduled, (with) Mötley Crüe and all that. So we don't know what's happening with that. As soon as we know, we'll be doing some gigs. We've got some gigs in October so far. We'll have to wait and see how this pans out…. Hopefully the album will be finished and out probably around Christmas, and we'll be out before then".

We shall notice that Last in Line's upcoming album won't be produced by Jeff Pilson, who had produced the first two albums of the band ("II" and "Heavy Crown").