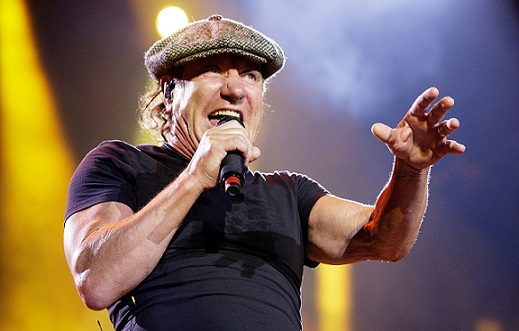 Brian Johnson, AC/DC's legendary singer, made some interesting statements, during an interview he gave to Q on CBC. He spoke about many things, however, we have collected here some of his sayings about the classic "Back in Black" album, his come back with AC/DC, his hearing loss problems, and of course, AC/DC' s new, "Power Up" album.

"We did it [the album recording] in the Bahamas, in this wonderful posh recording studio, and I've never been here before in my life! I was still just a working boy. And after about six weeks [of waiting after the recording was done] I said, 'It mustn't have been that good...' Because we've never heard it. We did it so quickly, we just moved from song to song, especially me, and Cliff [Williams, bass], and Phil [Rudd, drums]. Malcolm and Angus were putting on different bits and all of this and stayed there for the mix; we couldn't afford that, we had to get us back out of this, so it wouldn't cost money for hotels and stuff. And so we went back, and after about six weeks, I was going, 'It must have been crap.' Because I haven't heard anything. And then one day, the mailman came in with a big old vinyl. And I was staying with my mother and father at the time and they didn't have a record player so you cannot hear that, and I was like, 'Aw, shit...' I just couldn't play it and it was strange; I had to go to our lead guitarist's house, he had a record player, and we heard it there." [...] "At least I've got six weeks in the Bahamas! I've never been there, I might get a bit of a tan! Yeah, honestly, I really didn't know. I wasn't so much worried because of course, I was ignorant of the whole big business and all of that. I just thought these guys were really good, and they liked what they'd heard from me, so I'll just give it the best shot. But it might not work out, now, who knows in life... But it did work out. And I wasn't that dumb, I knew there was some special stuff coming out of there. The riffs when we did 'You Shook Me All Night Long'... [Producer] Mutt Lange had put a rough mix together and he says, 'Come on in, Brian, this is the song.' And I must admit I was impressed when I heard that. I just went, 'Wow, that's good.' 'Back in Black,' I just had a couple of choruses and without the full backing vocals and all of that, there weren't much on there. But 'Shook me' - I think that impressed me immediately, I thought that was a great rock 'n" roll recording!"

AC/DC comeback, his health problems and the "Power Up" album

"This to me was probably one of the happiest days in my life. That first day, I can see it now, when we all walked into that studio, and it just felt comfortable - it felt just like it which it always was. It was like nothing had happened. Except, we'd lost Malcolm [Young, guitar]. And we met at Malcolm's funeral in Sydney and talked after the ceremony with the family. We were all together, and it just seemed so natural that we were together. And we're still here, we think Mal had a big hand in getting about together again. He wasn't gonna let it lie down". [...] "There were the black days, that's all I can tell you - there was nothing! Plus my best friend died the same week at a very young age of cancer and it just hit me like a double whammy. But thankfully, I just thought about my age; I've had a great life and it's nothing terminal. Let's face it - think of all the people who are really in trouble. So I just thought I'd get through it. But then this technology came to my rescue, really, by a wonderful man called Stephen Ambrose". [...] "It was in Holland, we just shot the video, and Angus [Young, guitar] - thank god, bless him - he said, 'Leave us some bright scenes. We can get the whole crew up, we can do some rehearsals, just check out stuff and see if it works.' And I said, 'I don't regret it.' So we put the whole back line up, the real touring back line up - there are no fake ones in there - and then Angus said, 'Well, listen, we'll start a little quiet and we'll do it, don't hurt him.' I said, 'No, no, it has to be full battlefield conditions. Otherwise, it's just not worth it. I never want to be in that position again' ". [...] "I was jumping around like a big kid - you couldn't stop me singing! We did 15 days in a row and Angus said, 'I've never seen you rehearse so much.' I said, 'I can keep going forever, I'm enjoying the hell out of this!'. It was like being reborn, it was just fantastic - I could hear everything. I could hear the guitars, that was the main thing I couldn't hear. And I could hear the guitars and it was just - ah, yeah! I can't tell you how good that felt! As a vocalist who depends on the tone of the guitars and what you hear, and the boys were just thrashing it out, and I suddenly realized what I've been missing. It's a big part of life listening to music!".