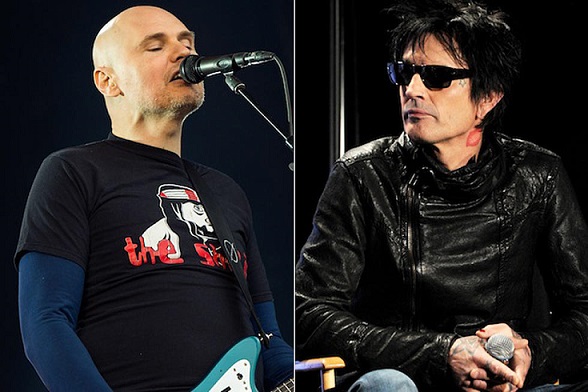 Tommy Lee (Motley Crue, drums) , who had played drums on The Smashing Pumpkins' 2014 album "Monuments to an Elegy", talked about Billy Corgan in a recent interview with Stereogum. He also refered to Post Malone.

"Man, talk about a challenge. Billy Corgan came to this studio and brought me some demos to listen to, and I loved the music. But it was a big challenge for me because in the prog-rock drum world the time signatures are constantly changing, and the feel of songs changes sporadically. It's not your straight-ahead four-on-the-floor thing. I love a challenge, though. Billy doesn't really believe in editing with Pro Tools, or taking the best of two takes to make one great take. He wanted a top-to-bottom uncut take that encapsulated the energy and feel of everything. 'That's magical, that's it!' He was adamant about that stuff, so we were on the hunt for the magical take, which took some time. Especially as the drummer - you'll think you have the perfect take, but those last few bars at the end you ran out of energy, or you space out and play the wrong part. 'Fuck, we gotta do it all over again.' But it was a great learning experience for me".

Asked about playing on Post Malone's "Over Now" in 2018, Lee replied:

"This happened through a mutual friend of mine who was also working with Ozzy [Osbourne]. He was like, 'Let's get together in your studio and jam with Posty!' I thought we'd just drink some beers and fuck around, but one thing led to another and then we went into a groove where we were like, 'Oh shit, this is sounding cool.' We hit Record and ended up using those tracks for 'Over Now.' Since then we've jammed together with John Mayer at The Forum to play Post's 'Congratulations.' He's a great guy. I respect his style and attitude, and he's a terrific songwriter - and, fuck, he's huge right now. I just remixed [Tyla Yaweh and Post Malone's 'Tommy Lee'], too, which just went gold. Tyla called me to tell me they'd send over a plaque".