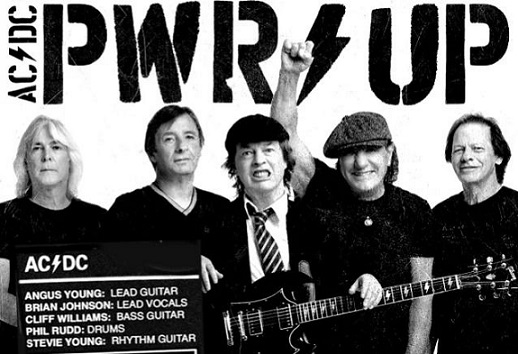 Yes, it is official! Yes, AC/DC is back with the reunited line-up of Brian Johnson, Phil Rudd, Cliff Williams, Angus Young and Stevie Young. There is no doubt about it, since the legendary band has released the first official photo of this line-up. The picture is the latest sign of activity from the hard rock masters, who are expected to announce their long-awaited new album.

Earlier this week, a mysterious poster appeared outside Angus's old school in Sydney, Australia. The poster placed outside of Ashfield Boys High School reads: "Are You Ready? SYD PWR UP." At the bottom of the advertisement, there was a link to a web site with the iconic AC/DC red neon lightning logo. On the web site itself, there are links to the AC/DC store as well as a "Power Up" e-mail sign-up, leading to speculation that the band's long-awaited new album is called "Power Up". A newly released teaser video from AC/DC, simply featuring the hashtag #PWRUP, only fuels the chatter.

On Monday, AC/DC updated its social media with a short video clip featuring the lightning bolt alongside the sound of a guitar or musical instrument plugging into an amplifier.

Earlier in the month, images seemingly taken from a new video shoot were apparently posted on the band's official web site before being swiftly removed. The photos, which were obtained by a Brazilian fan site, appeared to show Johnson joined by Rudd, Williams and Angus and Stevie Young. The pictures were the first of Phil and Stevie sharing a stage, adding weight to the rumor of Rudd's return.

A 30-second teaser of the first single off the "Power Up" album, "Shot in the Dark":