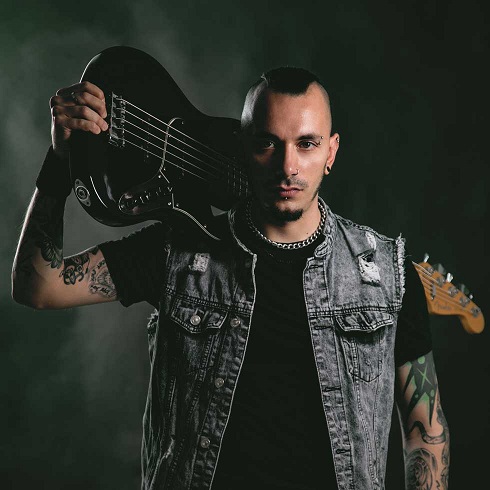 From a young age he showed a great passion for music and love for the electric bass guitar studying and improving his style and knowledge of the instrument.

During the early years he helped to developed several music projects that ranged from punk, rock, crossover to heavy metal. Later he found his ideal musical dimension with the band ‘Bremys’ inspired by the exceptional styles of bands like Tool, A Perfect Circle and Katatonia. He recorded two albums ‘Bremys’ (2008) ‘Resurgo’ (2009) the official music video “Quel che non c’é”. and had the honour to share the stage with internationally renowned artists on tour through Italy at that time.

In 2006 Lucio founded the ‘First of All’ booking, management and promotion agency with collaborators from different parts of Italy working together to support bands selling merchandise, organizing events and tours.

The same year as the founding member, singer and composer of ‘Bavarja’ recording three full production demos they played over one hundred shows and events during that period.

First Solo Album and Moving On

That same year he signed his endorsement collaboration with ‘Mogar Music’ Italy for Ibanez guitars and ErnieBall strings. Following this he replaced ‘Craig Gruber’ original bassist of ‘Rainbow’ and ‘Elf’ in the multinational Heavy Metal band ‘Raven Lord’ featuring US guitarist ‘Joe Stump’ recording the album ‘Down the Wasteland’.

Signed to ‘Mausoleum Records’ they played summer shows in the UK followed by the ‘R-Mine Metalfest’ festival in Belgium with ‘Symphony X, Masterplan, DGM’ and many others. He also worked with ‘Exorcism’ another multinational Doom Metal project signed to ‘Golden Core Records’ part of ZYX Music, Germany and recorded bases on the album ‘I am God’ 2014 and the EP ‘World in Sin’ 2015 as well as being featured in the official music video ‘Higher’.

2014 Lucio collaborated as a singer with the Sludge\Metal studio project ‘Iknausea’ releasing the album ‘What Really Pissed Me Off’ and also finished the recordings for a number of other international projects.

In 2015 collaborating as a session man with the Greek band ‘Jaded Star’ took him to shows in Athens and Thessaloniki to support the band ‘Epica’ on their “Greek Enigma Tour”. He then received an official endorsement with the Greek brand ‘Warlord Custom Pedals’ making the ‘Lucio Manca’ signature distortion pedal ‘The Quake’ and ‘Cronos’ delay unit .

Later that year he started his collaboration and partnership with Garry and writer ‘Paul Jupe’ for the Country Rock project A.G.D ‘A good Day’ which has been featured on BBC Radio UK and received some great industry reviews in Nashville TN.

2016/19 has seen Lucio as busy as ever both live and in the studio with the band ‘Tamurita’ produced by Joxemi (Ska-P) and SP Produzioni.

He recently created and produced the new single ‘Tu Sei’ and shared the stage with ‘Creedence Clearwater Revived’ for their ‘Sardinian Tour’, Max Pezzali, Punkreas, Lo Stato Sociale and more. He has continued with clinics and master classes in Sardinia with the collaboration of several private schools. The videos taken from his last solo album ‘An Old Man’s Sad Story’ have been supported, sponsored and shared by many influential pages and sites from the music community all over the world including ‘Bass Love, Bass The World, Bass Musician Magazine and Vic Firth’. Now as a recording artist at ‘Got Your Six Music’ UK he has been sought after for his talents as a session bassist for other band/recordings worldwide.

Lucio Manca is currently working on the production of his third anticipated solo album along with the new Casus Belli album that will both come out later in 2020.