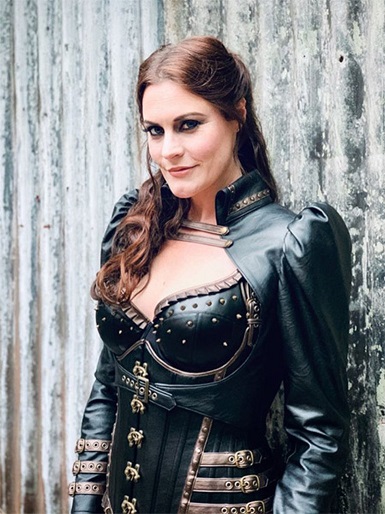 Floor Jansen, Nightwish singer, has recently recorded a solo song in the Dutch language, called "De Beelden Blijven", which was written by Han Kooreneef for the documentary "Kinderen In Oorlog: 75 Jaar Later" in cooperation with War Child. Now Jansen is releasing the English language version of this song, entitled "The Fight Goes On". But what is War Child? War Child is an organization that provides education and psychological care for children in conflict zones across the world.

Jansen said: "War Child is providing aid in Beirut as we speak and that makes this song extra important. Because the fight goes on. In so many places on this beautiful green earth help and support is vital for the future of children hurt by war and other forms of terror".

And she continued: "War Child helps children worldwide who suffer from the traumas of war. They want to help them with their invisible scars, to break the silence about their experiences on a child-friendly way through music, play and interaction with other children. So called psycho-social help".

Jansen spoke about her contribution to the track during a live video chat with fans in May. She said: "That was a huge honor, and I cannot start to tell you how amazing I thought it was to see all the reactions. I think now it's 25 languages the lyrics got translated in. It's fantastic to see everybody worldwide so engaged and so touched by the song".

"War, unfortunately, is a worldwide phenomenon, but it's music that does the wordless talking sometimes," she continued. "And even though it's cool to see it in your own language, I think one of the first reactions that I saw was that a lot of people felt it before they actually knew what it really meant. And to know the words, of course, if amplifies the actual meaning, but it was wonderful to see the initial reactions. It came in so strong. That was the intention, of course".

Jansen went on to say that she is "very grateful" to have been asked to sing on the song. She said: "It's War Child doing all the helping, and trying to help, in this case, children to cope with the effects of war and make sure that, or try at least to make it so that it's not a sentence for life mentally, which is quite a challenge that I can only imagine".