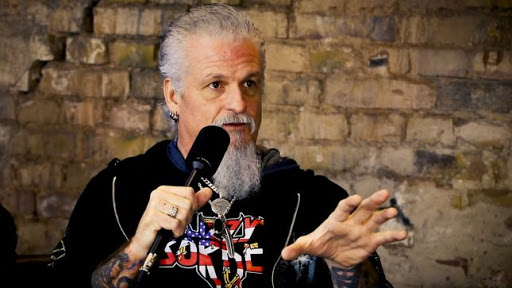 Jon Schaffer, guitarist and leader of Iced Earth, had recently a Faceook Live chat, where he revealed his future plans!

Jon Schaffer said: "Obviously, the whole lockdown situation has changed the plans for everybody," he explained (see video below). "The first step this year was to work with Jake [Dreyer], the other guitar player in ICED EARTH, I was gonna help him with the production for the new WITHERFALL album. I still am going to — we're just having to reschedule things and postpone it a little bit. So, that was the plan — to start that towards the end of March and wrap up by mid-May. And the plan was to take a little bit of time off and then start working on new ICED EARTH material. Everything is a little bit up in the air right now. Even working on a new ICED EARTH album is gonna be challenging until we see how all this plays out, because it's an international band. Stu's [Block, vocals] in Canada and Luke [Appleton, bass] is in the U.K., so that makes it even more difficult for travel… The biggest issue now is logistics of actually getting together to do it, because we're an international band. If we lived in the same town or even in the same country, it would make things a lot easier. But we will [get around to making a new album], and there will be a time for that, no doubt. To say when that's gonna be, my plan was to focus on it in the back half of this year and have a release in spring of 2021. But the world's flipped upside down and has gotten pretty weird lately".

At this point, Schaffer refered to his plan of releasing his first book!

Jon Schaffer commented: "This is a book that is completely unique — I've never seen anything like it before. I will be introducing some new characters from the 'Something Wicked' story," referring to Schaffer's fictional story which was introduced on ICED EARTH's 1998 album "Something Wicked This Way Comes". "And it is gonna be the precursor to many things coming related to that. As many of you know, I've been talking about doing graphic novels and comics and stuff like that for a lot of years," he continued. "Well, this is the first step into that direction. I'm starting a publishing company, and this book will be the first launch on that. We will doing a Kickstarter [campaign], and it's gonna be pretty awesome. It'll also have an exclusive audio CD, which is, again, something that's very unique — I don't think that anybody's done anything like this before. So I'm exciting about it. I've got a brilliant group of artists that are involved in doing some amazing stuff. So you'll see. There's gonna be more coming on that soon. We were actually supposed to film the Kickstarter a few weeks ago, but with everything that happened, we just decided to hit the pause button here," he added. "So that's it. We're gonna play it out. At some point — once I get the WITHERFALL project done, working with those guys — then I will definitely be focusing on writing some new material and also launching a new record company that will be ICED EARTH-specific, or at least releases that I'm directly involved in. I'm not really interested in signing other bands and going down that road — I can't really see myself doing that — but at least for ICED EARTH stuff and projects that I'm directly involved in, that's the idea. And we're also gonna be going to Kickstarter for that when the time comes to launch, which actually won't be too far. I would say probably early to mid-summer is when we're gonna start working on that".