It’s been a long time anticipated, and now it’s official: 1980’s speed metal veteran, founder/vocalist John Cyriis, has resurrected his brand creation, the “Agent Steel band and its new incarnation in 2019 ...is finally upon us!”

The band’s current lineup consists of guitarist Nikolay Atanasov, and original Agent Steel guitarist Bill Simmons; Mr. Simmons is the first/original guitarist of the Agent Steel lineup, as the band first appeared throughout the L.A. club circuit in 1983. Also included in this classic/new lineup are bassist Joe McGuigan (Gama Bomb) and drummer Dennis Kruse Strømberg. This incarnation of Agent Steel is the long-awaited reactivation featuring Agent Steel founder, brand creator, vocalist John Cyriis, who appeared on all three original classic albums, (i.e., "Skeptics Apocalypse", "Mad Locust Rising", and the platinum seller "Unstoppable Force"). John is very pleased with this new lineup, which he is confident will arise as the very best lineup in the band’s history and whom he believes are certain to compliment the band’s legacy, and about manifest an about-face - that to counter and transcend the band’s “less than competent performance” by a stand-in and unofficial lineup at the KIT festival 2019!

The official new Agent Steel lineup are currently working on the band’s 4th true and official studio album titled, "No Mercy From The Godz" - which is scheduled for an imminent October 18, 2019 launch. The band are also preparing for their forthcoming shows at various privileged confirmed dates—beginning on Friday 6 December and Saturday 7 December in Milan and Firenze, Italy. John and the new Agent Steel incarnation are also preparing for a monumental first time appearance in Greece as headliners, performing at Up The Hammers festival in Athens, Greece—March of 2020. This headlining performance is forecast as being fertile metal soil for the band’s first live Agent Steel DVD/album to be captured as fronted by original founding vocalist John Cyriis. Expect this lineup to be the best ever incarnation of Agent Steel — stronger, faster, and deployed to demonstrate just who are the True Masters of Metal. Be on the lookout for the Agent Steel craft to land in your country - certain to energize all you bangers with Hammering Speed Metal!

John and the band are inviting all Agent Steel bangers to come rage with them in Italy and Greece, December 2019 and March 2020! Looking forward to seeing all you diehard Agent Steel fans on tour in the fall of 2019 — and throughout 2020!

Steve Beatty Dissonance head honcho: "What’s not to like! The Unstoppable Force returns and is about to land an epic slab of killer speed metal on my label! Soooooo excited about this record and can’t wait to see the band firing on all cosmic engines live soon!" 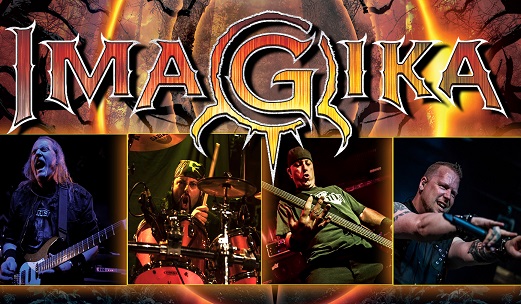 After 10 years Imagika is back! The most successful lineup of the band with guitarist Steven D. Rice (Kill Ritual), vocalist Norman Skinner (Skinner, Niviane, Hellscream), bassist Jim Pegram (Mudface, Angerhead) and guest drummer Matt Thompson (King Diamond) have recorded a blistering new album that is a modern take on where the band left off in 2009. Their new 8 track effort, mixed and mastered by Andy La Rocque at Sonic Train Studios, is a testament to the bands overlooked talent and is scheduled to be released 9/13/19 via Dissonance Productions.

The bands first ever video was shot in March with Mike Sloat (Testament, Machine Head,Lynyrd Skynyrd) for the track “The Spiteful One” at the infamous Sound Wave Studios in Oakland, CA. A lyric video for the title track “Only Dark Hearts Survive” will drop as the first introduction to the new album.

Imagika guitarist Steven D. Rice comments on the rebirth of the band: "While on the Kill Ritual tour  (with Iced Earth and Sanctuary) we made a stop in Sacramento, CA. which is not far from the SF Bay Area and where all the past members live, so Jim and Norm made it out for the show. Jim played with Kill Ritual that night (as he did on the European tour the year before) and Norm caught the performance. I hadn’t seen Norm in years so we drank a few (ok a lot!), bullshitted, caught up on life and had a nice reconnect. Fast forward a few months later. As I was writing the new Kill Ritual record I would have material hanging around that didn’t quite fit the KR style or direction and that with some older ideas from the past I said to myself “Wow this really has an Imagika direction to the material”, so I ran a couple ideas past Norm and he gave it his spin and before we knew it we had an album composed and ready to go. After bringing in Jim, who’s been pushing for this for years in on bass along with a guest appearance by Matt Thompson (King Diamond) to play drums it sounded great. I’m a firm believer in always moving forward and never looking back, but I’ll have to eat my words on the “Never Again” and just say it was meant to be! The new songs are definitely Imagika in 2019 with tight riffs, concise arrangements; hook laden vocals and great grooves! I think our old and hopefully new fans will absolutely love this CD. We can’t wait for you all to hear it!"