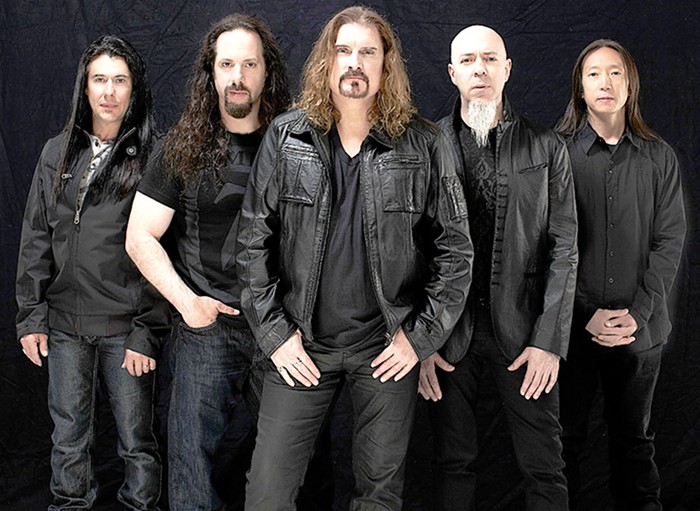 According to the band's new video message, Dream Theater are currently working on the follow-up to "The Astonishing" album (2016), which is going to be "heavy, progressive, melodic, shredding and epic"! James LaBrie, John Petrucci and the rest of the pioneering band have locked themselves in the studio and have begun composing new songs. Let's see what LaBrie and Petrucci said in the clip.

James LaBrie: "John and I are here at the studio. We've been here for one week, and it is going sensational. Everybody is in the one room, and we're all interacting with one another, and I've gotta tell you, if the first week is any indication of where this album is going, you're in for a treat".

John Petrucci: "Yeah, the vibe is really cool, the hang is cool, the atmosphere, the inspiration. It's been great — there's a lot of ideas flowing. It's already been really productive, only a week in, which is cool".

J.LaBrie: "Not to mention just the style of the music, which I think a lot of people will stand up and applaud at this point. But there's a heaviness to it, there's an aggression to it. But you mentioned something earlier when we were talking about this, and you said, what was it? The five…"

J. Petrucci: "The five pillars of D.T. I think everyone's on the same page with the type of record this is gonna be. I mean, so far the music is heavy, it's progressive, it's melodic, it's shredding, and it's also epic. So it has all those elements, which… they are the five pillars of Dream Theater, if you wanna call it that. We just called it that; there you go ... And the cool thing is everybody is contributing. We're fired up with all our gear as a band, so it's a real big live sound. We kind of get an idea when we're writing what things really feel like to play and whether the grooves are powerful or whatever, whether it really is hitting us and making the hairs on our arms stand up. And just to give you a little insight on how we're doing this and what we'll be doing for the next couple of months, we have all the gear set up, all of our live gear, and we're basically going through this kind of neat little board here that we have set up. It's a very simple thing, but all the instruments are pretty much direct. We only have four mics on the drums, and as we complete a section or a song even, we get it to where we can all play it — as hard as it is, however many takes we have to get and we get a really solid live demo out of it. And then what we're gonna do is we're also multitracking, so we'll take that multitrack and then we'll mix that down, so we'll have a pretty good-quality demo. And then our engineer will then take that and prep it for tracking, so he'll prep it for Pro Tools, so when it's time to track and overdub, we'll be all set to do that".

J.LaBrie: "I think that's the beauty, though — you're laying it down and you're recording it, and then we get a reference mix. So we know right away: is it hitting us the same way that it felt when it was going down? And then you're able to either adjust, go back, rethink it, or it's great, and we can just move on. It's a very positive situation and a very productive one".